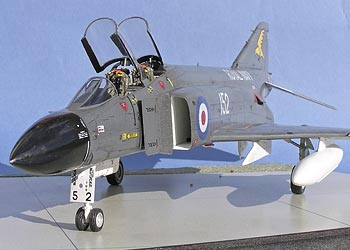 This is a Royal Navy Phantom FG. Mk 1 completed in the markings of 767 Naval Air Squadron, RNAS Yeovilton c.1970.

Cancellation of the Hawker P.1154 led to the procurement of the F-4K for the Royal Navy. This was a modified version of the Phantom to include Rolls-Royce Spey engines, and other UK built components. To enable operation from RN aircraft carriers, the Phantom also had an extendable nose gear leg for catapult launches, and a 180 degree folding nose cone to enable the aircraft to fit on deck lifts.

767 NAS was commissioned in 1969 as the Operational Conversion Unit (OCU) operating from RNAS Yeovilton in Somerset, England. It was then disbanded again in 1972. The front line squadron, 892 NAS operated from HMS Ark Royal until its disbandment in 1978. 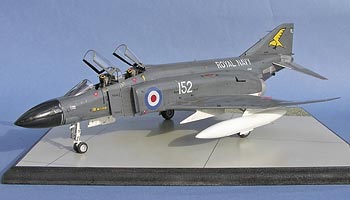 The series of 1/48 Phantom kits by Hasegawa has been well documented and so a detailed discussion will not be repeated. Suffice to say that they build up into very attractive, detailed models and there are plenty of after-market accessories for people wanting that little bit extra. British Phantoms can be built with either the FG.1 or FGR.2 kits and as this was going to be a RN example, I started with the former.

Starting with the cockpit, the construction is relatively smooth. The kit cockpit was used, painting the base colour first and then white over the details that would eventually be painted black. Once black has been applied over the white, a sharp blade was used to scrape over the raised detail, thus revealing the white underneath. 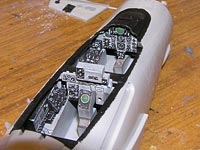 Whilst working on the major steps of construction, one should pay close attention to getting the correct alignment of the engine intake pieces and the main fuselage (can be done by making additional alignment tabs), and filling any gaps left after mating the fuselage and wing construction. To keep the gap filling neat and tidy, I used masked off the gap before applying humbrol filler. Once dry, I then wiped the excess away with a cotton bud dipped in nail varnish remover.

The paint scheme that (nearly) all RN Phantoms were seen in was extra dark sea grey upper surfaces and white lower surfaces. Humbrol 123 and 130 were used for this, applied with an airbrush.

Once the white was applied, I found that it had managed to seep through my kitchen towel masking. Two more coats of EDSG then had to be applied to the upper surfaces. Lesson learned!

I used the 1/48 F-4K sheet produced by Almark Decals for this scheme which were kindly given to me by Graham Goodliffe (I have since bought another copy of this sheet). The sheet has several options for RN Phantoms. As previously mentioned, my chosen subject was a 767 NAS example, XT867. The decals require care in application as when they are wet, a white residue lifts off the paper. To ensure a clean finish, I first attempted to rinse off the residue from under the decal by half sliding it off the paper and wiping it gently with a wet finger. This seemed to work well and with a coat of Klear/Future under and over the decal a good result was achieved.

Another area of note during the decal phase was the application of the large serial numbers on the lower surfaces of the wings (This is perhaps one of my favourite aspects of RN Phantoms). I had to dry fit the main undercarriage doors in order to apply the serial number decals. Once the decal had dried, I sliced it along the line of the doors with a sharp blade.

The weathering was done using the chalk pastel wash method, a description of which is in the tools 'n' tips section of ARC. I concentrate on one area of the model at a time - applying the wash and wiping away the excess. 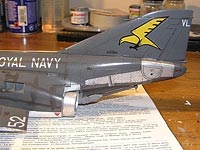 This was a very enjoyable project from start to finish. After being inspired by a visit to the Fleet Air Arm Museum at Yeovilton, the very place this aircraft operated from, I knew I had to have a RN Phantom on my shelf. The kit, whilst not being an absolute "shake and bake" goes together nicely. The Almark decals were very good value for money, and with some care they can produce excellent results. I added a pair of Verlinden seats which, while not being strictly accurate, add provide extra level of detail to the cockpit. Having just bought the Revell re-boxing of this kit, I am planning to do the 56 Sqn "Firebirds" as my next British Phantom.