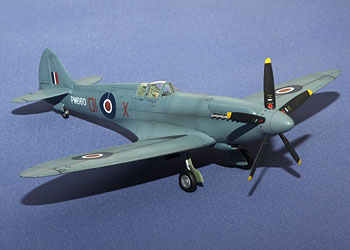 This is a 1/48 model of a Spitfire PR.XIX of 2 Sqn, RAF, based at Wunsdorf in Germany c. 1950. It was made using the new kit from Airfix, released in February 2013. In addition to the build report, the author will offer some comments on the kit which hill hopefully help anyone considering this kit for their next project.

This is the latest in a series of 1/48 scale Spitfires from Airfix, which (from the Mk.XII onwards in terms of release date) have been generally well received. The kit was announced at Scale Modelworld 2012 in Telford and it seemed to have been a well kept secret by Airfix. 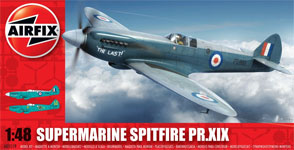 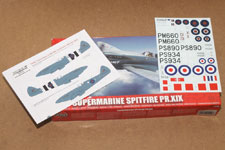 As the reader might expect, construction begins with the cockpit which includes a detailed camera bay with the option to open the hatches to show it all off to greater effect. There is also fantastic detail on the cockpit sidewalls, instrument panel, and oxygen cylinders behind the pilot's seat. The only thing the author would reccommend for the cockpit it a set of seat belts, possibly made from strips of masking tape as he did. Once the interior is complete and the fuselage halves have been mated, the remaining construction is quite simple and straightforward. The model require little, if any, filler and it is not long before paint can be applied. 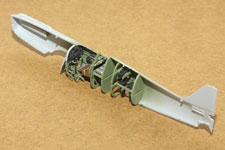 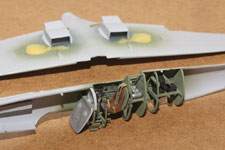 The chosen scheme required an all-over PRU blue finish, so the choice was made to go with the out-of-the-pot Xtracrylix option which is XA1008. This was applied over a coat of Alclad grey primer, and then subtly shaded by lightening and darkening the thinned down base colour (but not much at all). Walkway lines were masked off and sprayed in black as neither decal sheet I had offered them (kit or Xtradecal). Also the black areas at the wingroots were sprayed after much searching for photo references of this particular aircraft. The last step before decalling was to spray a couple coats of Vallejo acrylic gloss varnish, thinned with Tamiya X-20A to about 50%. 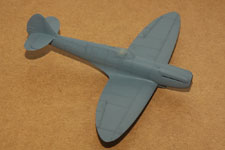 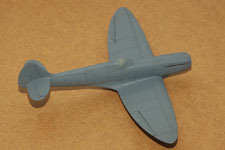 The Xtradecal decals worked very well, with the use of Microsol and Microset. They conformed to the raised detail on the underside of the wings, and although they did go into the panel lines nicely, they were helped along by slicing through the decal, into the panel lines with a sharp modelling knife, after it had been applied to the model and left to dry. The Microset was applied after this. 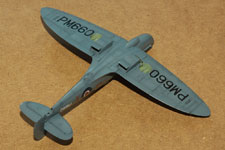 After the decals were finished, another coat of Vallejo acrylic gloss varnish was applied and left to dry for at least 24 hours. A subtle panel line was was mixed from oil paints, by lightening payne's grey to a level that wasn't too stark against the PRU blue of the model. Thinned down with white spirit, this was run into the panel lines and after drying, the excess was wiped away with a dry kitchen towel. Any stubborn areas were carefully cleaned up with a tiny bit of white spirit on the kitchen towel or a small brush.

With the panel line wash done, a subtle exhaust stain was sprayed, with Tamiya Smoke (X-19), thinned down with X-20A, to about 50%. This was applied gradually, in misty coats until the author was happy wth the effect.

The finishing coat was again a Vallejo acrylic varnish, with the intention of leaving a bit of shine to the model, to catch the light and not flatten it right down. The author had previously found Vallejo acrylic matt varnish to give a very flat, almost "dead" finish and if applied too heavily, a sort of dusty look to the model. Wishing to avoid this situation on the PR.XIX, it was decided to start from the satin acrylic varnish and apply a few drops of gloss back in to the mix. This custom mix of varnish seemed to take back the shine of the full gloss, but leave a good amount behind. 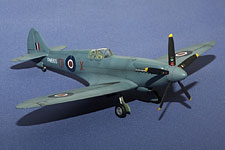 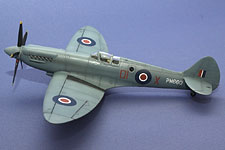 Airfix have another great kit in their 1/48 Spitfire PR.XIX. It carries on where the Spitfire XII and Seafire XVII left off in terms of level of detail. In fact this kit appears to be another step on - cockpit details being that much better and on the point of panel lines - they too appear to have been improved, being finer than the couple previous "Spits". 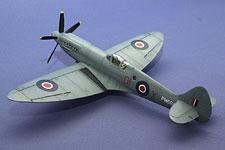 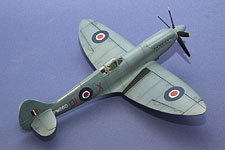 The author enjoyed this build tremendously. This could be down to te simpliciy of the build - and maybe too, the paint scheme! The kit builds up quickly into a really nice model. Whilst options for schemes may seem a little limited, there are international machines and variations in British schemes too. Whilst the Xtradecal sheet is of high quality, there are some details missing which will have to be sourced elsewhere. However the kit itself comes highly recommended, and will be a very enjoyable build for modellers of all abilities.